Cyptomania and the Bitcoin Bubble

Bitcoin is a bubble.

While that may seem like a trivial statement to bitcoin skeptics and heretical to bitcoin enthusiasts, bitcoin is one of the most incredible phenomenon in recent memory.

As a University of Chicago undergraduate, I was almost constantly reminded that there was no rigorous definition on an asset price bubble, however I would define them as a transitory surge in asset prices fueled by incomplete/poor information, risk seeking behavior and fear of mission out. 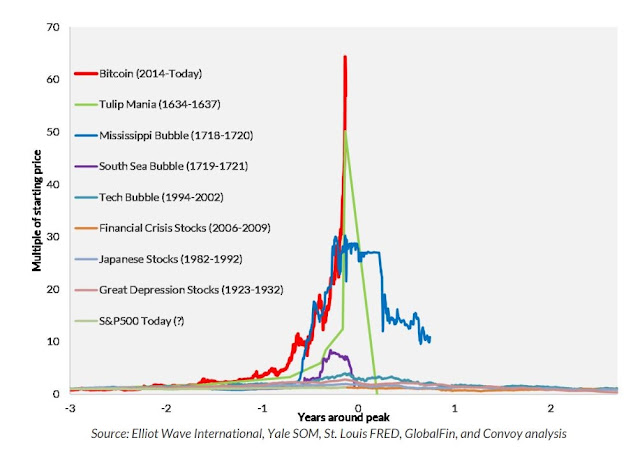 Few sophisticated Wall Street firms have even considered trading in bitcoin, and for a good reason.

There are 3 components to a currency: 1) being a medium of exchange, 2) being a store of value, 3) being a unit of account. Bitcoin and cryptocurrencies certainly fail at #1) as extremely few vendors will exchange goods for bitcoin, let alone know what it is. They also don't do well at #2) with providing a stable store of value given the huge amount of daily volatility bitcoin and other cryptocurrencies have.

Some of the popular arguments given by crypto enthusiasts to justify their price include: one a fixed supply which should cause prices to rise over time as the demand and uses for a cryptocurrency increase over time. However, with more crypto currencies popping up almost every few days in "ICOs", we now have a rapidly expanding supply of cryptocurrency with the rise of Ethereum, Litecoin, Bitcoin Cash, Dogecoin and the list goes on.

The other argument is that the cryptocurrency accounting mechanism of blockchain technology is such a technological breakthrough that it can somehow sustain price increases. Blockchain is indeed a revolutionary technology but it will continue to grow just as easily without being married to bitcoin and cryptocurrencies (Ripple being a great example using cryptocurrency to revolutionize payments)

What is consistent with almost every major asset price bubble is how poorly an asset is understood among its often unsophisticated buyers.

The amount of unsophisticated bitcoin investors (of a size of roughly 16.3 million currently in the U.S. according to estimates) who don't understand the technology behind bitcoin are numerous. Libertarians have played a substantial role in the movement promoting the belief that somehow bitcoin will replace traditional sovereign backed currencies as we enter some sort of anarcho-capitalist utopia they envision.

Surprisingly, there have been reports that over the past 3 weeks, the most popular topic in NFL locker rooms has been Bitcoin. It shouldn't be surprising that NFL players are statistically more likely to go bankrupt than other individuals because of their poor spending and saving habits couple with their irrational expectations about the length of their NFL careers potentially lasting a decade (which is only about 3 years on average).

The frenzy has become crazier, with companies like LongFin, Riot Blockchain, Crytocurrency AG all seeing huge surges in their stock prices, and most hilariously Long Island Ice Tea Company witnessing a 500% appreciation in its stock price after simply changing its name to "Long Blockchain". Some of these companies the SEC has even begun suspending trading in and lawsuits alleging fraud against various crypto ICOs have began emerging.

Ultimately, the cryptocurrency market has become a "Keynesian beauty contest". In other words, people are not even placing value on what they truly believe bitcoin or other cryptocurrencies are worth but more importantly what they think others believe they are worth based on the vague promise of a revolutionary technology and bitcoin's price rise becomes a self-fulfilling prophecy.

Its only a matter of time before people realize that cryptos are worth closer to $0 than their current valuations. 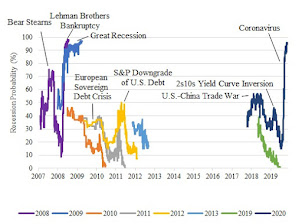 Recession By End of 2020 Currently Trading At 95% (PredictIt) 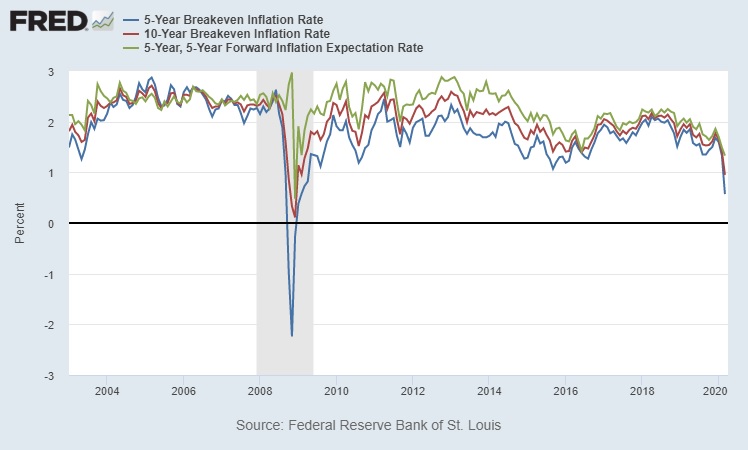 Jon Hartley
I am an economics writer and researcher with interests in macroeconomics, finance and behavioral economics (along with their intersections). I am a regular economics contributor at various outlets including Forbes though this blog is intended for more rigorous posts. I graduated with an M.B.A. from The Wharton School of the University of Pennsylvania and a B.A. in Mathematics and Economics (with honors) from the University of Chicago.